Home / Interviews / The career of a UFC referee: the stakes are high, scrutiny is rife and praise is rare

The career of a UFC referee: the stakes are high, scrutiny is rife and praise is rare

By Andrew Hansen on July 17, 2017@theandyhansen 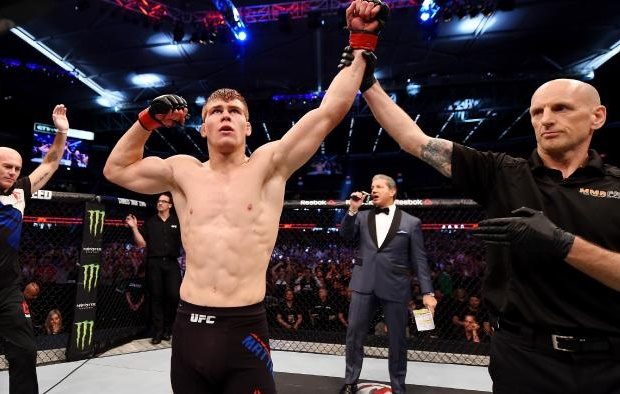 SAITAMA, Japan – it was the 26th of September 2015, and Australian mixed martial arts referee Greg Kleynjans was preparing for the biggest fight of his career. Gegard Mousasi vs. Uriah Hall at UFC Fight Night Japan. “It was a co-main event so everyone was looking,” Kleynjans said.

A punter betting $100 on Mousasi could only win around $15. The same wager placed on Hall could return over $300 in winnings.

Although a heavy underdog, Hall’s arsenal included a long list of creative strikes. Shortly after the bell rang, it was the front kick. But Mousasi, like many predicted, was too seasoned, and he caught the kick with ease. In a matter of seconds, Hall was on his backside, beneath a rampant Mousasi, who started dropping heavy fists and elbows.

It appeared only a matter of time before Kleynjans would raise Mousasi’s hand. In the meantime, Kleynjans felt comfortable in this one-sided contest. “This is good, I’ve got this,” he thought to himself, stationary in his prime position to view the grappling fighters.

Hall was saved by the bell. He had escaped the first round, and more important than his one-minute respite; the fight would be restarted on the feet.

Just ten seconds into the second round, Hall launched his 185-pound frame upward, and spun 180 degrees through the air, directly away from his opponent. Still in mid-air, with the hang time of MJ, he extended his right leg back towards Mousasi. His foot landed flush on his opponent’s face. Mousasi stumbled backwards, but Hall leapt towards him, this time driving his knee into Mousasi’s face.

A jumping turning sidekick, immediately followed by a flying knee, both directly to Mousasi’s head. An unexpected and unpredictable exchange. Kleynjans was no longer comfortable.

Kleynjans charged towards the fighters, before frantically circling around them, trying to determine if he should stop the fight. “Looked like maybe the referee had made contact with one of the fighters,” remarked one of the UFC commentators.

“It was a nasty turn around, real quick,” Kleynjans said when reflecting on this fight. After dominating the first round, Mousasi was suddenly in danger and Kleynjans had to act fast. “I got hung for [the stoppage],” Kleynjans said. “My movement was terrible… I ran around, I bounced in, I bounced out.” Kleynjans’ clumsy movement distracted from Hall’s graceful striking. “I didn’t look very good on TV,” he said.

Kleynjans got called into the commission room after the fight, where they evaluated his performance. “I actually stopped it at the perfect time,” Kleynjans said. Mousasi was no longer intelligently defending himself, so Kleynjans had to stop the fight.

Kleynjans fulfilled his job as a referee to protect the fighters. But that didn’t stop the heavy criticism he received after this fight. This is indicative of the high-pressure and hypercritical nature of refereeing for the UFC, the largest MMA promotion in the world.

A UFC fight means so much to so many people. The fight-altering actions of a referee are under the spotlight.

The fighters are in there to win, so when they are on the wrong side of a referees’ decision they are often aggrieved. “I’ve been called all sorts of things by fighters when I’ve stopped a fight,” Kleynjans said.

Kleynjans once stopped a fight with only one second left in the first round. The fans booed and the losing fighter was upset. Three weeks later at another UFC event, Kleynjans walked into an elevator at two in the morning, and the only other person inside was this fighter. “It was me and him on the slow ride up,” Kleynjans said. “The doors shut and he goes, ‘I’ve been wanting to talk to you’.”

When the commentators believe the referee has made a mistake, they have no qualms broadcasting their criticisms to millions of people across the globe.

The critics are the guys that are sitting there watching four different camera angles in slow motion and get a chance to assess what happened. We get that one second in the real time from the angle you’ve got from your eyes.

An announcer once approached Kleynjans inside the octagon after a fight to question his actions. “He’s got no right to ask me a question, it’s got nothing to do with me,” Kleynjans said. “He can talk to his media mates about it.”

The media even talk to the referees during the fight. “Step right ref,” instructs the cameraman from the top of the cage, trying to get clear vision of the fighters. “I’m not listening to them, I’m worried about (the fighters),” Kleynjans said.

“I don’t take notice of anyone. I know I’ve done everything I possibly can to be a good ref,” Kleynjans said. “I just try to be a benefit to the sport.”

Only 12-years-ago, Kleynjans was an MMA coach and had no thoughts of refereeing. That was until he cornered one of his fighters at a small Australian promotion. Greg sat in on the rules meeting and watched all of the fights. He thought the referee got everything wrong.

“I can be one of those guys that sits there and abuses the referee – like most people do – or I can actually do something about it,” Kleynjans said.

A few weeks later, Kleynjans traveled to Singapore to teach a martial arts seminar. Herb Dean, who is widely considered the best referee currently in the UFC, was also in Singapore, refereeing for the King of the Cage.

The pair ran into each other days before the event. “I just got chatting to him and he said, ‘I need your help, you understand the game’,” Kleynjans said. Herb had no one to assist him with the fights, so upon Herb’s request, Kleynjans agreed to judge the show. Kleynjans saw no similarities between Herb and the referee from the smaller promotion in Australia. He was particularly impressed by Herb’s composure in the cage. “He’s pretty calm and relaxed, and if something does go down he doesn’t change his tone or get bothered by it,” Kleynjans said.

The admiration was mutual. Herb was impressed by the knowledge of MMA Kleynjans displayed when judging the fights. Herb invited Kleynjans to be a “crash-test dummy” for his new referee-training course. Kleynjans gladly accepted this invitation in the knowledge that this was his opportunity to do something about the incompetency of MMA refereeing.

Herb taught Kleynjans how he remains so composed. “Herb tries to tell himself before each fight that ‘there’s nothing I haven’t seen before’.” Kleynjans acknowledged that this is a lie because anything can happen in MMA, but he still tells himself this before each fight to try and remain calm.

Kleynjans also acquired a deep understanding of the rules of MMA through this training. He knows how important this is. “If we enforce the rules correctly than we will protect the fighters,” he said.

“And understanding the positions (the fighters) are in,” Kleynjans continued. This came naturally to Greg through his long history of marital arts. He has trained in Wing Chun, Krav Maga, Brazilian Jiu Jitsu, Muay Thai and boxing. “I’m still on the mat everyday,” Kleynjans said.

“I’m certainly not a star at any of the martial arts that I do. But I know what it feels like and I know what’s going on, and I think that’s pretty important.”

Kleynjans has taken a punch. He has received a leg kick. He has been caught in a choke. He knows what the fighters are feeling and he knows when they are in danger, both on the feet and on the ground.

Kleynjans was in rare company after completing this training. In many states, referees aren’t required to attain accreditation through courses like Herb’s. These untrained referees can even referee UFC fights, as state commissions run UFC events and select the referees. “That scares me,” Kleynjans admitted.

Fast-forward to today and Kleynjans is not only refereeing in the UFC alongside Herb, but he is now a partner in his referee school and is currently in LA assessing the new crop of applicants.

Kleynjans finds that many of the applicants are “fanboys,” who love the UFC, but can’t fight and are looking for an alternative way to get on TV. “They find out pretty quick that it’s pretty thorough and pretty hard,” Kleynjans said. The course currently has an eighty percent fail rate.

Kleynjans is as qualified as anyone to referee a fight. But that isn’t always enough. His worst mistake was when he called stop to a fight, but failed to stop a fighter from stomping his opponent who lay helpless on the ground.

“I beat myself up over that one,” Kleynjans said. He has since watched the footage of this fight over a hundred times. Perhaps Greg’s biggest critic is himself. “If we don’t critique ourselves we‘re not going to get better,” he said.

“If I get it wrong I put my hand up,” Kleynjans continued. “I’ve done thousands of fights, I’d like to think I get most of them right. But it’s not always that way, it’s MMA, anything can happen.”

In those thousands of fights, Kleynjans is only noticed when he gets it wrong. “It’s a pretty thankless job being a referee,” Kleynjans said.