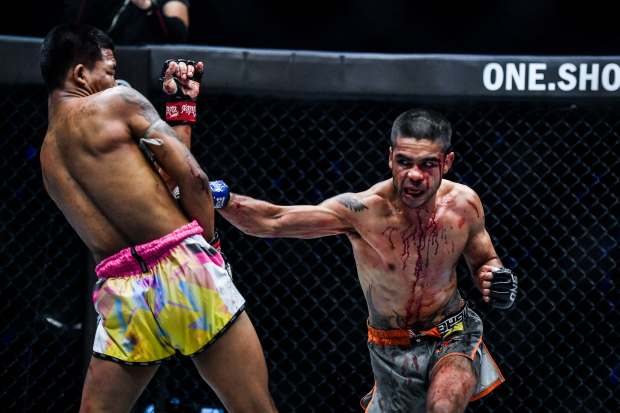 Western Australian fighter Danial ‘Mini T’ Williams stepped up on late notice to headline One Championships’s ONE on TNT card earlier today and although he lost the decision, he earned the respect of his opponent, Thai star Rodtang ‘The Iron Man’ Jitmuangon.

The 27-year-old Kao Sok Muay Thai and Scrappy MMA trained fighter met his opponent in the center of the cage in the Muay Thai rules bout and the two traded heavy combinations with Williams particularly finding a home with the right hand early in the bout.

Rodtang increased the exchanges in the second round. The Thai veteran rocked Williams with a left and shortly after dropped him with another heavy left. Williams beat the count but the barrage immediately came from Rodtang, as landed heavy punches and two elbows that cut open Williams above his left eye. With blood dripping down, the Aussie attempted to stay in the pocket to trade but it was a clear round to Rodtang.

It was the third round that ‘Mini T’ earned Rodtang’s respect. With the cut still leaking blood, Williams came out aggressive, landing punches that got a reaction from the Thai. The fight was paused to clean the blood but immediately on the restart both came out throwing heavy leather in the small gloves.

When the buzzer for the end of the fight went, Rodtang immediately dropped to his knees to show respect to ‘Mini T’ and Williams followed likewise. In a nice moment of sportsmanship, the two embraced in the middle of the cage but the winner was clear.

All three judges awarded Rodtang the decision and he moves his ONE Super Series record to 10-0.

The bout was contested at a 61.5kg catchweight and broadcast live to Australian audiences via the promotions youtube. It was also One Championship’s debut in the U.S, part of a multi-year agreement with Turner Sports.

Notably, the card also featured former flyweight king Demetrious Johnson who was unsuccessful in claiming the One Championship title, losing to the reigning champ, Adriano Moraes in the second round by TKO.

Eddie Alvarez also had a night to forget.

The 37-year-old former UFC champion was dominating his opponent however multiple strikes to the back-of-the-head left his opponent Iuri Lapicus unable to continue. Alvarez was shown the red card and thus disqualified from the contest, much to his frustration as he protested claiming the strikes were legal in his post-fight interview.